David Sarner, owner of Childproofers Inc, didn’t grow up dreaming to be a childproofer, but he is now in his fourteenth year of doing so successfully. He had owned other businesses, but was working in sales, traveling too much in 2001 when his then 3 year old daughter said, “Daddy I miss you.” Within the week he had resigned his sales position, both he and his wife wondering what he would do. That weekend he saw an ad in the New York Times – Childproofing Business For Sale – and it all clicked together. His children now aged 12 and 16 no longer need babyproofing, but when asked his favorite thing about being a childproofer, he enthusiastically answered, “hanging out with kids all day, they are just so much fun!” 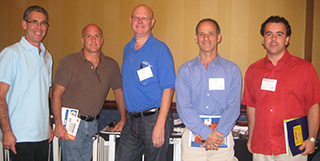 David Sarner, second from the left,
at IAFCS Annual Conference

David has come a long way from his first day of childproofing in 2001 when he drove his “Toyota Camry 3 hours in a snow storm to get to a job which should have only been 20 minutes away! Turns out it was the mansion owned by the 2 brothers of Black Crowes,” he recalls, “they opened the doors to the recording studio and told me NOT to go in there, but to babyproof the rest of the house before leaving me there.” He now drives a large truck stocked with more than a dozen gates of different styles as he nearly exclusively does same day installation. He is also a Certified Professional Childproofer through the International Association for Child Safety. He sought certification 3 years ago to further himself as a professional and bring more attention to the industry.

David finds he is often referred by local mommy blogger groups who like him because he is “knowledgeable, fast and efficient.”  He charges installed prices per item for easy decision making by parents. Gates are a big part of his business for both stairs and to divide the home into safe zones for the children by keeping them in the parents’ sight.

“The biggest overlooked hazards I see are camera monitors and cords too close to the crib. Parents don’t see how the baby can reach it. It’s definitely an education process,” David explains. “Recently there were some blog postings about furniture tipping and I got a lot of calls about that. Parents just need to see it could happen to their child.”

“I think the main reason I get the calls to do the babyproofing is so busy parents can spend quality time with their kids instead of spending weekends doing what I can do in one day,” David stated.

The International Association for Child Safety (IAFCS) is a network of child safety professionals and babyproofers. As experts in their field, IAFCS members have the unique experience, knowledge and skills to help make your home a safe place for your little ones.

Locate a professional childproofer in your area